The Constitutional Act of 1791 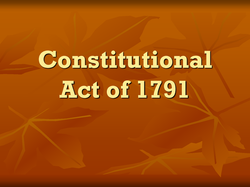 The Constitutional Act of 1791

Loyalists tended to settle in areas where there was available land. In Nova Scotia, new immigrants moved to areas west of the Bay of Fundy. They quickly outnumbered the existing population . Loyalists argued that the government in Halifax was too far away to understand their needs. In 1784,a royal charter created the colony of New Brunswick. Cape Breton Island also became a separate colony.

In Quebec, Loyalists tended to move west of Montreal. They settled in areas such as Cornwall, Morrisburg, Kingston, and farther west in the Niagra region. Loyalists in these areas felt that they should have the same rights as other British citizens.

However, Quebec was still governed by the Quebec Act of 1774. This act meant the colony used French civil law and the seigneurial land-holding system. The seigneurial system was especially offensive to Loyalists. In it, farmers had tenure, which is a right to occupy land, but did not have full title, or ownership.

In 1785, Loyalists sent a petition to the king of England that stated "They were born British Subjects, and have ever been accustomed to the government and Laws of England... and they still possess the greatest Confidence, that by Your Majesty’s Gracious Interposition [kind actions] they will be exempted [freed] from the burthens [burden] of French Tenures"

The British government responded by passing the Constitutional Act of 1791. It was modelled after the system that had been put in place to create New Brunswick and Cape Breton in 1784.

Upper Canada was guaranteed the English Freehold system of Land ownership. This meant farmers could fully own their land

One seventh of all land in Upper Canada was set aside as clergy reserves, which were sections of land controlled by the Anglican Church

One seventh of all land in Upper Canada was set aside as Crown reserves, which were sections of land controlled by the lieutenant-governor

From the point of view of many people in the British government, the American Revolution resulted from too much democracy. A democracy is a government in which the population elect all or some of their government. The British believed the elected assemblies in the former Thirteen Colonies had gained too much power over the appointed British governors. It was runaway democracy, with disastrous results. Britain now faced demands from Loyalists who wanted an elected assembly. They had proved their loyalty to Britain, but were used to having a significant voice in their government. Britain knew it owed something to these loyal subjects. However, it wanted to be sure that democracy would not lead to more rebellions. In the Constitutional Act of 1791, the elected assembly was given as little influence as possible.

Levels of  the government structure-

The government’s executive branch included the main decision makers for the government: The legislative council created and approved all laws in Upper Canada. Legislative councillors were appointed to their positions for life. Positions were passed on from father to son.

The Executive Council advised the lieutenant- governor on all government matters. Councillors were also appointed, but not necessarily for life.

The Legislative Academy also had the power to impose taxes. Tax money was to be used to run the government and its projects.